In the year 2013, the A Coruña City Council held a competition for the rehabilitation of the rose garden at the Jardines Méndez Nunes. Over the years, diseases and deterioration have removed from this part of the gardens all its splendor, turning it in an almost residual area, in gardens developed in an area of 20,000 m 2 filled between 1868 and 1874. They are clearly 3 areas with a marked development.

The first corresponds to the alameda, planted with Palm trees in a row, rounding an Esplanade today paved and bordered by buildings such as the kiosk Alfonso, the Terraza and the Hotel Atlantic, in substitution for the original wooden barracks.

The second account with the heart of the gardens, with the central space of romantic design, where have matured a great number of specimens of tropical plant adapted to these latitudes. The winding walks converge in a central area where are located the source and the building of the Atalaya, former municipal library, converted into a cafeteria.

And the third, the rose garden was created between the 1920s and 1930s and acquired its current shape in 1959 after the Mayor Alfonso Molina travel to Paris and Switzerland. The municipal leader wanted to create a park of Central European appearance based on the rose-bushes, with a classic design.

Garden of the senses.

The proposal we are presenting in this competition arises from the very beginning with the idea of recovery and rehabilitation of the space itself, with respect to the tracing, reference from the development of the origin of the Park, and the nuances that can provide you a detailed from sense perception.

The limit and the traffic.

With the deterioration of the side walks the sensation of continuity of the garden has been lost at this point and especially limit necessary for identification of the rose garden, offering protection to the Queen of flowers. Retrieve the ride along with the Magnolia trees on one side and oak on the other hand, allow us to give continuity to the gardens, perceiving the whole as a unit, while teaching its particular attraction.

At the same time, this element should consider its protection function of the urban space from the heavy traffic that surrounds it, offering an environment conducive to the awakening of the senses, and accompany the visitor in the first meeting.

Respect to the original path.

In keeping with the original plan, must meet two fundamental issues: respect the legacy of the original layout ordered towards the statue of Linares Rivas and simultaneously approach the visitor species responsible for awakening the senses in a secondary plot.

Keep the solution of the original layout as most characteristic element of the piece. And it configures space relate to the city, Calle Juana de Vega and alignment of the streets Avenida de Arteixo, Notariado and Fontan, which connects us with the Park of Santa Margarita.

Overlap the two plots: the radial solution of the original layout and the trace of polar ordination that gives us the sensation travels.

The gardens and plant species.

Arises for the limits of the garden areas, a constructive element, shaped in the form of inverted L, which we anchor in the field and will serve to delimit each zone. It will contain the gravel of the main ways.

Enhances the implementation of rose-bushes, with a greater presence and volumetric configuration. Combination with species of enhancement, and selection of rose-bushes, seeks to give the garden a more long-lived attraction throughout the year, and involve all the senses. In the field of “smart city”, it would be feasible to prepare training materials that accompany the visitor with botany, culinary, health information… 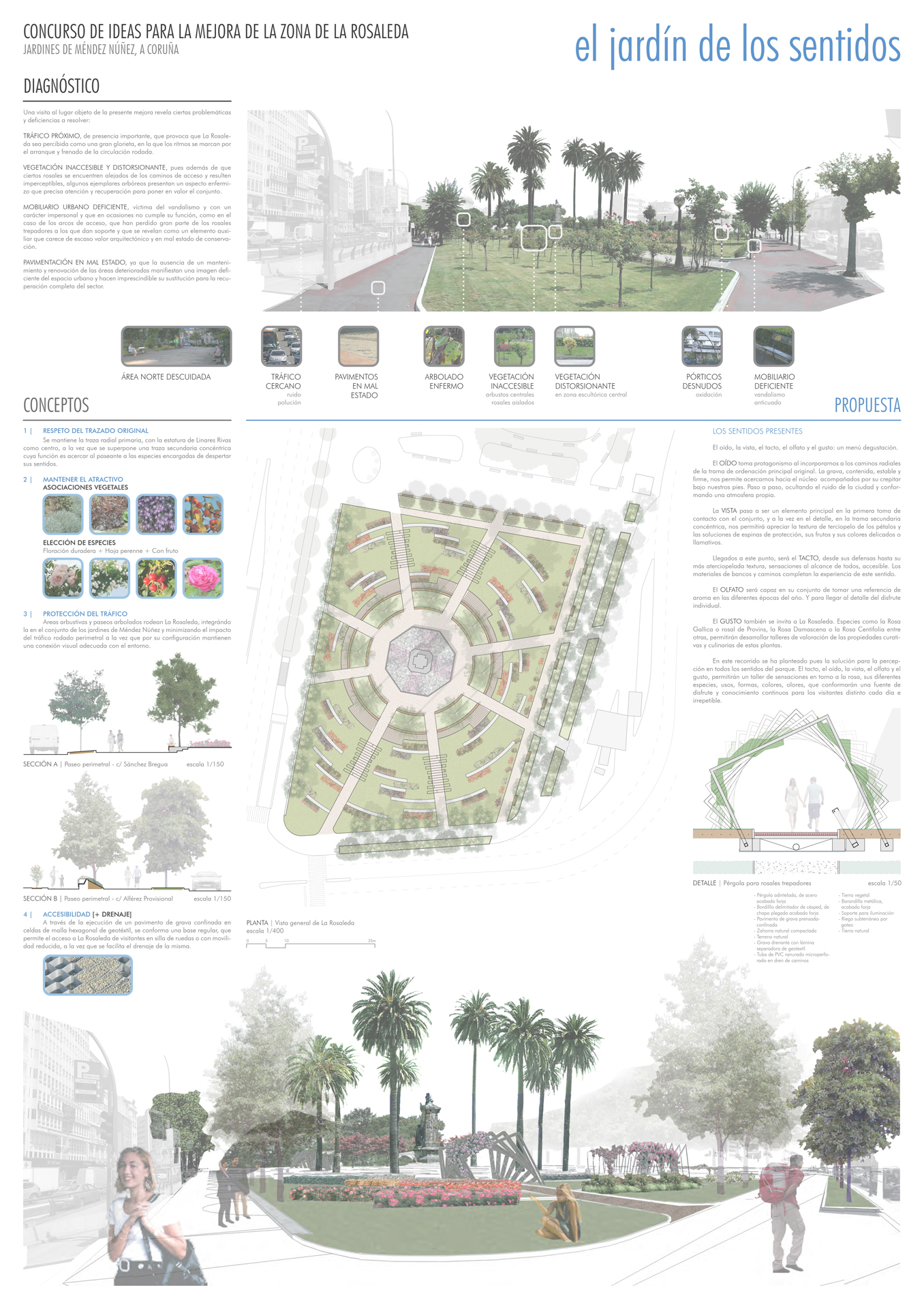